Posted on September 7, 2018 by portiabridget

Flights is a series of imaginative and mesmerising meditations on travel in all its forms, not only the philosophy and meaning of travel, but also fascinating anecdotes that take us out of ourselves, and back to ourselves. 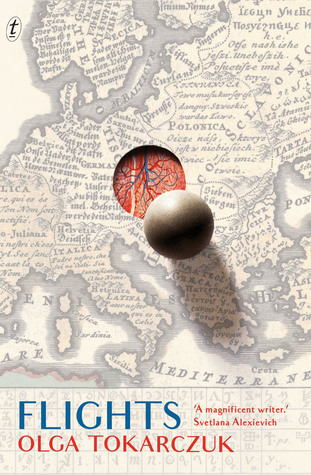 Olga Tokarczuk brilliantly connects travel with spellbinding anecdotes about anatomy, about life and death, about the very nature of humankind. Thrilling characters and stories abound: the Russian sect who escape the devil by remaining constantly in motion; the anatomist Verheyen who writes letters to his amputated leg; the story of Chopin’s heart as it makes its journey from Paris to Warsaw, stored in a tightly sealed jar beneath his sister’s skirt; the quest of a Polish woman who emigrated to New Zealand as a teen but must now return in order to poison her terminally ill high-school sweetheart…

It is not an easy book, with nice, linear narration like a scheduled trip from point A to point B. If I had to compare it to a journey, it would be a travel of somebody who has too much time and money on their hands; they are meandering without any goal, following just their own whims and they are horribly whimsical. In some places they stay far longer than they intended to; in others they leave after just several hours. The majority of the novel is written in first person singular narrative voice so at first it seems you’re dealing with just a travelling journey of the author, served in bite-sized fragments, some mere paragraphs; then Tokarczuk adds some fictional biographies and letters. Still the story doesn’t get more coherent because of them.

Flights takes you also back in time – to the 17th century Netherlands or Austria for example – to tell you about the history of anatomy, autopsies and tissue preservation. And then you return to modernity in order to hear various tales about travellers and their adventures. One is about Eryk, a ferry worker who goes off piste one day with a full load of passengers; another is about a woman whose elderly husband is teaching on a cruise of the Greek islands and has an accident. A young couple with a child are traversing a small, Croatian island when the wife and the son get lost. Or disappear. Everything can happen when you are moving, right? Don’t expect easy answers to all your questions or nice, tied-up endings to all the stories. After all the author warned you early on – she loves cabinets of medical curiosities and all things broken.

A rambling journey, with some parts more and some less interesting but overall worth reading. I had to finish it even if it left me a bit uneasy.

4 Responses to Flights by Olga Tokarczuk