Posted on November 23, 2018 by portiabridget

A  mockumentary, allegedly based on real events occurring in Nome, Alaska in 2000. A recently widowed psychologist Dr. Abigail Emily “Abbey” Tyler (Milla Jovovich/ Charlotte Milchard) uses hypnosis to uncover memories from her patients of alien abduction, and finds evidence suggesting that she 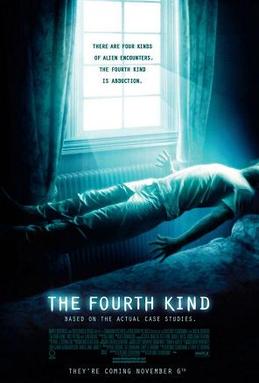 may have been abducted as well. When she is preparing to run for her life her little daughter is taken and the police suspects she might be responsible for that. Will she manage to persuade them she is a victim, not a perpetrator?

This horror had one big flaw: the director failed to persuade me that his story rang true, despite the whole ‘mockumentary’ setting. The film had two components: dramatization, in which actors portrayed the individuals involved, and “documentary”, in which video footage purported to show the ‘actual’ victims undergoing hypnosis. It was a tad irritating to be honest, as if I needed to be constantly reminded about the basic premise but it wasn’t the worst.

After a while I found the Aliens doing the abductions were really stupid, even if they, coming from Sumerian times,  supposedly were not mere centuries but millenia old. Well, from stupidity to silliness is just one step and it is not good for your thriller when you smile, even laugh out loud. So: Aliens were cruel and stupid, Abbie was sad and stupid and the police, especially the town sheriff, were strangely blind, aggressive, and stupid. It leaves out a lovely owl but poor animal couldn’t do much. Mind you the creep factor was about assuming that what you’re watching is, in fact, true and that the homemade videos are all in fact legitimate. However I have to admit  that the further I got into the film the more I had  to suspend my disbelief until I reached a level of an utter ‘no way.’ Pity.

Despite an interesting premise The Fourth Kind wasn’t creepy, it was annoying. Only for avid fans of Blair Witch Project.