Posted on December 28, 2018 by portiabridget

Aud Torvingen is back — contemporary fiction’s toughest, most emotionally complicated noir hero returns to teach a new round of lessons in hard-hitting justice, and to confront new adversaries: her own vulnerability and desire. 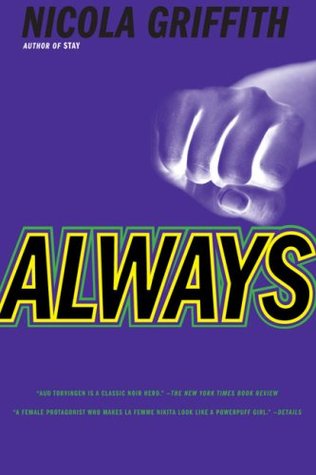 The steely shell of Nicola Griffith’s seemingly indomitable protagonist Aud Torvingen appears to be cracking. The six-foot-tall fury (who proved in The Blue Place and Stay that she can kill you as easily as look at you) is shaken by the shocking consequences of the self-defense class she’s been teaching, and her investigation of what seems to be run-of-the-mill real-estate fraud is turning out to be more than she bargained for.

It is a stand-alone book even though officially it is marketed as a third part of a series. I didn’t have any problems with finding my bearings. In fact, at first I wanted to whoop with joy – I liked the beginning of this one enormously. These main characters. That narrative voice. But then the more pages I read the less I enjoyed the content. I ended up completely bored. Perhaps it was that duality in narration – the book is, in fact, two stories in one, joined by the same heroine, Aud. In one part she is teaching a group of Southern ladies from Atlanta basic self-defense.  It was the story arc I more or less liked, especially as the author proved time and again that she knew what she was writing about. In the second part Aud is visiting Seattle, meeting her high-profile Norwegian mom, the new stepdad, and falling in love with Kick, a stunt woman turned caterer whom she meets on a plan of a new tv series pilot.

The second part I had most problems with. To be honest it left me puzzled. At the beginning, I hoped it would somehow connect with the first line of narrative and make it more significant. I was wrong. Both stories flowed alongside but never merged (or merged very subtly  and I somehow missed it, could happen to the best of readers). Moreover the second part had some element which  annoyed me a bit. For example the fact that Aud, seeing Kick for the first time in her life, immediately assumed the woman had to be homosexual (or bisexual at least). There was no shred of doubt, no hesitation whatsoever, no questions, as if all film plan caterers inhabiting  the nice city of Seattle consisted mostly of homosexually inclined people (while the situation, I suppose, is the other way round ). If at least Kick sported that tell-tale rainbow badge or if Aud had overheard her speaking about her own preferences I would understand it. The fact that the author herself is a lesbian and admits it in the acknowledgments section doesn’t change a thing. The premise still sounded spurious.

A good style but not especially good story line (and a horrible cover one have to add). I found the book both too long and too boring even though the beginning was great. Meh.