Movie review: War of the Arrows (2011) directed by Han-min Kim

Two children, the older boy called Nam-yi and his little sister, Ja-in, are being chased by King Injo’s guards. 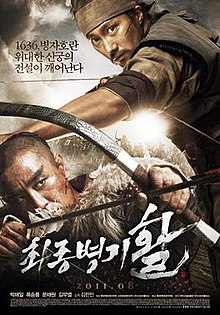 They are saved only by the ultimate sacrifice of their father, Choi Pyeong-ryung, an officer of King Gwanghae and a skilled archer who was accused of treason. Before he dies he tells them to find a place of refuge with his best friend Kim Mu-seon and they do so but with difficulties.

Fast forward – 13 years later. The adult Nam-yi (Park Hae-il) becomes a skilled archer and hunter but he lacks focus in his life. He is drinking heavily, haunted by the ‘traitor’s child’ tag which, in his opinion, makes it impossible to follow any career path *rolleye*. One day he learns that Seo-goon (Kim Mu-yeol), the son of his guardian and benefactor, wants to marry his sister Ja-in (Moon Chae-won), now a young beauty. The girl happens to return the sentiment of her suitor. Reluctantly Nam-yi agrees to that union but personally he thinks his sister will bring only bad luck to any man willing to marry her.

During the wedding, when Nam-yi is up in the mountains hunting deer, he hears the rumble of the invading forces of Manchu who have chosen that very day to invade Korea. Anxious Nam-yi returns to the village. He finds his guardian, Kim Mu-seon, slaughtered; his sister and brother-in-law are taken away, most probably held prisoners near the Korea-Manchuria border. Nam-yi then sets out to find the oppressors, free his sister and take out the entire invading army with his bow. Will he succeed?

I wanted to like this one but somehow I didn’t.

Ostensibly there was nothing wrong with the movie. For most of its running time (over two hours) there was plenty of action: the hero was either chasing his sister’s abductors or the villains were chasing him. In between I was shown an enemy invasion, running battles, steely confrontations and even a family quarrel. Linear narration, easy to understand? Check. Nice, dynamic action scenes with impressive feats of archery? Check. Excellent CGI blending seamlessly into the action? Check. A plucky heroine who tries to save herself using every weapon available? Check.

Still the movie also seemed like one big propaganda ad, favouring the brave Koreans and bashing the cowardly, cruel Manchus (if you are wondering: one of Chinese ethnic minorities). It was so schematic, so disgustingly white and black, that after a while I was left rather underwhelmed, wishing that at least one baddie showed a bit of humanity (or, alternatively, one white hat proved to be unscrupulous and cruel in turn). No such luck. The ending was as predictable as the beginning – the young couple and their happiness was restored but only at a cost of life (not saying whose life but it’s super-easy to guess).

10 Responses to Movie review: War of the Arrows (2011) directed by Han-min Kim